Leave me alone for long enough, and I will start cooking things. It’s just what I do. I’ve shared a few of my recent from-scratch health-food experiments, as well as my foray into the wild world of condiments, but last week my kitchen thinking went a little outside the box. Or perhaps I should say, inside the box. 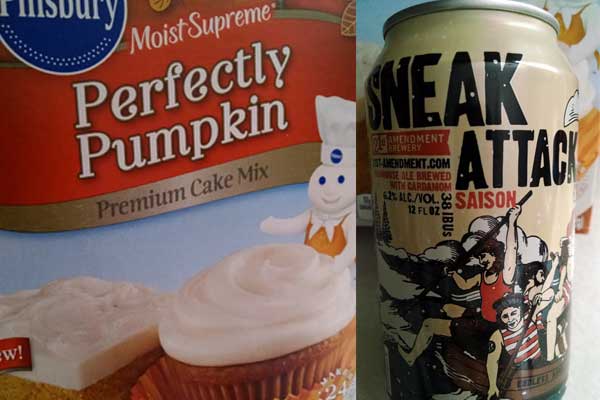 I’ve made 2-ingredient cupcakes before, so I know that the boxed mix and soda combination does actually work. Branching off that premise, I thought, why not beer? It’s fizzy and flavorful, plus I always see Guinness baking recipes pop up each year when St. Patrick’s Day rolls around. Working with what I already had in the house, I figured that the cardamom kick in this wicked saison would actually work pretty well with the pumpkin flavor.

I mixed it up exactly the same way I would have done for soda cake – just poured 12oz of beer into a bowl with 1 box of cake mix and whisked it all together. I baked it according to the package directions for cupcakes, opting for the lowest cooking time in the suggested range. The general chatter on the web is that soda baking yields slightly fewer cupcakes than traditionally prepared boxed mix, but I got 24 perfectly sized cupcakes out of this combination. I’m thinking the yeast in the beer helped plump up the batter. Either that, or I just got lucky.

These cupcakes are not perfect. For starters, they needed to set overnight before they actually had any structural integrity. Secondly, they do have a (very slight) bitter aftertaste to them. Also, after a day, you’ll definitely want to store them in the fridge. All that said, I still really like them. I’m a fan of bitter desserts, especially the sort of bitterness that comes from a very dark chocolate. This was sort of reminiscent of that, and also tempered by the mix of spices. 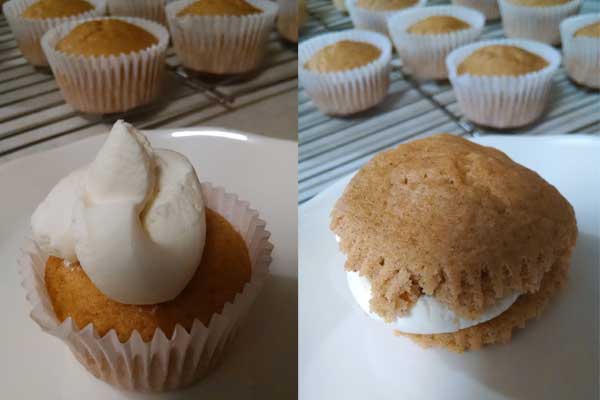 I made a 2-ingredient cream cheese frosting to go with it by combining whipped cream cheese with sweetener until it hit the right balance. This was a really successful hack, allowing me to skip the addition of butter and also the time usually spent waiting for the cream cheese to soften. After tasting one topped the traditional way, I decided to smash two cupcakes together like a whoopie pie. You know, for science.

The verdict? This dessert isn’t for everyone, but it’ll be a hit amongst beer lovers. If beer isn’t your thing, I’d still recommend trying out soda baking. It’s quick, easy, and lets you fool around with fun flavor combinations. I know it’s not exactly in keeping with healthy eating, but hey, I’m only human.

One thought on “Baking with beer”