Incidentally, this post is also nuts. Well, chock full of nuts. I’ve gone bananas for nuts? (Thank you, thank you. I’ll see myself out.)

I love bananas in every stage of ripeness, but there is a certain magic quality that brown bananas have, full of sweetness and possibility. My favorite use for ripe bananas has always been banana bread, mostly because there are so many different recipes out there to try and they’re all fairly adaptable.

With bananas going brown on the counter, I popped onto the siggi’s website hoping that my new favorite yogurt would have a suggestion for my perpetual favorite baked good. Much to my delight, they did!

The recipe calls for their vanilla filmjölk, which is a very unique pourable yogurt that is similar to kefir. It’s slightly tangy and is often used in place of buttermilk to lighten up recipes. I like to pour it over muesli for breakfast, but I’d never cooked with it before so this was a welcome experiment.

The only adjustment I made to the recipe was replacing the chopped walnuts with chopped peanuts. This was because of an allergy in our house, but I must say that I think the banana bread tastes even better with peanuts in it. I’ve mentioned their site before, but I love having pre-chopped peanuts from Nuts.com in the pantry for days like this. All I had to do was measure and pour, which made the baking process a snap.

Per usual, I didn’t really measure the amount of spices and probably gave my banana bread a heartier dose of cinnamon than is called for. If you’re feeling punchy you could add a bit of ground ginger as well, or even your favorite mix of pumpkin pie spice.

For me it came out perfectly after 50 minutes of cooking and was delicious both warm the night I made it and also the next day slathered in peanut butter for breakfast. Because obviously I needed even more peanut-y goodness.

Originally, this was meant to be the end of my post. But in delaying my writing by a week I ended up having a few more bananas go brown on me. In fact, these seemed to beg to be baked, going directly from green to brown overnight.

For those who are new to working with exceptionally ripe bananas, I wanted to take this photo to show you that they are not nearly as unappealing on the inside as they may seem on the outside. However, the peels will be rather… odorous, so it’s best to either put them in an outside trashcan or at least in an extra bag within your kitchen trash. 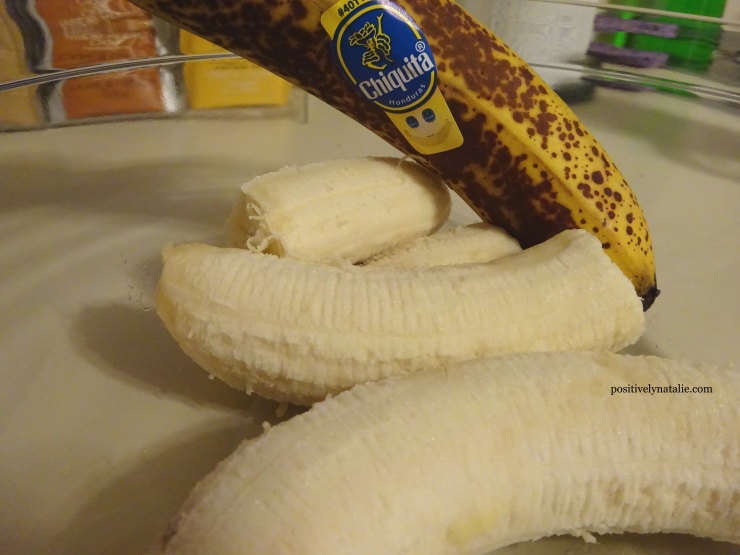 The great thing about these oat bars is that, provided you use certified oats, they are completely gluten free and also dairy free. I have made them in the past with different combinations of dried fruits and nuts, but this time I went with chopped dates and the same peanuts I used in the banana bread.

The recipe is from the kitchn, and I would recommend you head over to her site and follow the instructions exactly. The only change I made was adding about 1-2 tsp of honey for just a little bit more sweetness. I included the vanilla and the salt, and put cinnamon both in the batter and sprinkled on top. 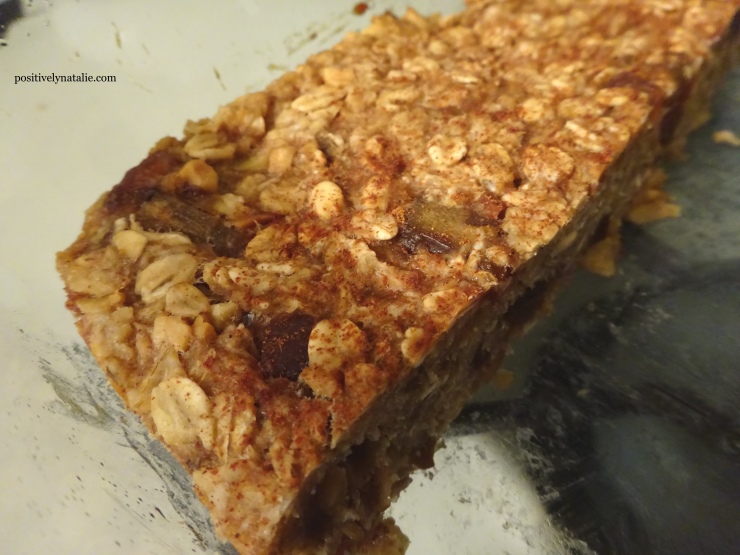 Because I used three bananas instead of two (waste not, want not) my bars came out slightly more thick than hers. I’ve made them in the past with fewer bananas and they come out thinner and crispy on the edges. That being said, I actually like these thicker bars. It makes them feel more like an anytime dessert rather than a snack bar. Since mine by nature have more moisture I decided to store them in the fridge rather than the pantry.

I currently have a new batch of bananas ripening in the fruit bowl, and something tells me I’ll probably have at least two brown ones again in the next week. So if you have a favorite recipe for very ripe bananas, I’m all ears! Let me know in the comments and I’d love to try out something different for a follow-up post.