A how-to guide for the hibernation enthusiast

Even though the recent solstice means the days are getting longer, it’s still going to be a while before the days are hospitable. Considering the weather around here seems to be either bitter cold or sopping wet, the most inviting place to me right now is inside of my own home (or more specifically, inside of my sweatpants, inside my home).

I wouldn’t go so far as to call myself a recluse, but I would say that I’m at the top of my hibernation game. To help the rest of you get on my level, here are some suggestions for making the most out of the remaining winter months.

The aforementioned sweatpants are all well and good, but if you really want to show the season who’s boss, full-body comfort is key. The monastic styling of the iconic Snuggie does the best it can for a glorified bathrobe, but you can do better. For the ultimate in cuddly softness, there’s only one word you need to know: Kigurumi.

Broadly, a kigurumi is any character costume, and the characters in Japan are notably weirder than anywhere else in the world. Because, Japan. More recently, the definition of the word has been expanded to include fleecy, magical, character onesies, affectionately also known as “disguise pajamas.”

I picked up a Totoro kigurumi while I was living in China, and I have several roommates who can attest to the fact that I wear it regularly. If you’re not lucky enough to live somewhere within Taobao delivery range, you can order online from the Kigurumi Shop. They have a pretty good selection of various animals and characters, including quite possibly the most adorable likeness of Dracula I’ve ever seen.

Running is not my forte. Running is not even remotely close to my forte. Binge-watching television, on the other hand, is an activity where I would have earned stacks of medals (if it were the sort of thing that they gave out medals for). My Netflix marathons are a thing of beauty, carefully balanced to both entertain and also occasionally allow me to pretend that I am learning something.

How does this scientific balance happen? Historical dramas. They are more interesting than documentaries, by far better acted than actual history shows, but also still full of incidental education. I spent some time re-watching the entire series of Buffy the Vampire Slayer (vaguely educational if you squint your eyes and tilt your head sideways). After watching a season, I would take a pause for a period drama.

I started with The Paradise, which is a British series about a guy with immaculate facial hair who opens London’s first department store in 1875. Despite the fact that everyone has perfect teeth and the ladies seem to prescribe to 20th century grooming techniques, it’s still an interesting window to a period of time I didn’t know much about. Also over on that side of the pond, I very much enjoyed The Bletchley Circle. It follows a group of women who worked together as code breakers during WWII, who come together a few years later to solve a crime they realize the police got wrong.

I’m now currently re-watching the entire series of Psych (in preparation for watching the final season for the first time) and I punctuated a few season breaks with the Canadian series Bomb Girls. It’s about ladies who work in a WWII munitions factory in Toronto and wear a lot of awesome hats. It also features some stellar dialogue, such as this line, delivered from a hospital bed: 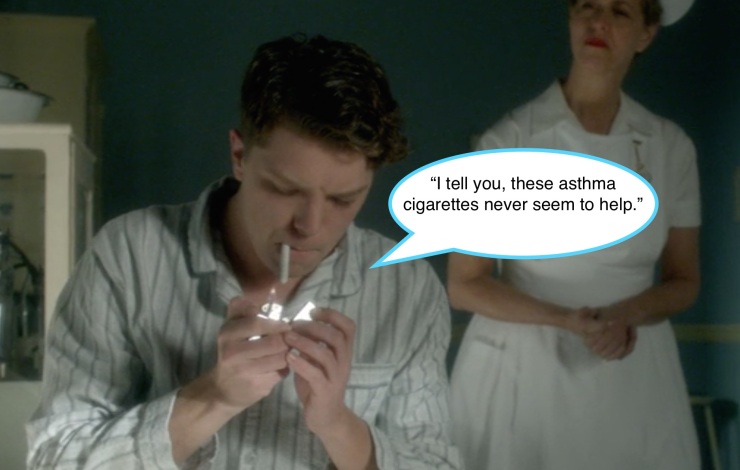 Now that you’re all snuggly and settled in for a day of sedentary streaming, it’s crucial to throw a bit of comfort food in the mix. Since you don’t want to pack on the pounds like an actual hibernating animal, I’m going to share with you a recipe for perhaps the greatest thing to ever come out of my microwave. Or any microwave, for that matter. It also saves you the sadness of hunting down a copy of Microwave Cooking for One.

The most important step in this process is finding yourself a very large mug. If the mug is too small, this delicious concoction will never make it out of your microwave and into your mouth. That would be a terrible tragedy.

Into this large mug, add:

Use a fork or whisk to mix it very well. I find it’s best to start with a slow stir, otherwise the cocoa powder will puff out of the mug, then more vigorously mix until the ingredients are fully combined into a batter. You could leave it at that, but I would strongly recommend taking a big spoonful of your favorite nut butter and dropping it into the center of the cup.

Timing is probably going to vary based on your microwave, but I find that 1min30sec does the trick for me. The end result is a totally guilt-free mug of chocolate cake that you can then curl up with in front of the television. She’s not the prettiest girl at the ball, but damn does she know how to have a good time.

4 replies on “A how-to guide for the hibernation enthusiast”