I normally pay about as much attention to insurance commercials as I do ads for AARP travel discounts. And considering I’m not really their desired demographic, they probably pay about the same amount of attention to me. However, a recent campaign from AXA caught my eye, and unfortunately for all the wrong reasons.

The basic premise makes sense – If you spend too much time worrying about big financial decisions (such as retirement planning or life insurance) you might miss out on important moments. I can see the thought process there, and it’s a fairly standard brief. The problem for me is that the execution of that brief shows so much gender imbalance I’m surprised it made it past the pitch.

The first ad of the campaign that I saw was cheesy, but inoffensive on initial view.

That was, until I saw the second ad in the campaign.

When the male consumer spent too much time worrying about life insurance, he missed out on boatloads of money. In other news, if all it takes to launch a $40 million dollar deal is having a matching tie, I’ve been going about business all wrong. 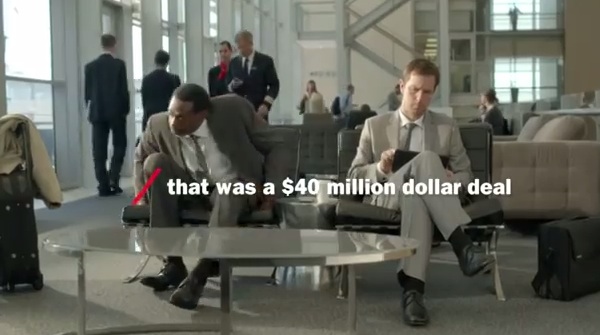 When the female consumer spent too much time worrying about retirement, she missed out on meeting her soulmate. Her soulmate. Considering her alleged soulmate is a guy who sits around cafes in the middle of the day sketching portraits of ladies reading newspapers, it’s probably valid that she’s worried about saving for retirement.

My best guess is that they were trying to play on stereotypically gendered fears, hoping it would resonate with their target market. And, as I’ve previously stated, I’m certainly not their target market. But the thing is, I’m likely only about ten years away from being in their target age bracket (for retirement savings, probably not life insurance). So while I may not be a potential consumer at present, I’m a future potential consumer, and I’m monumentally offended. Although, I’m not surprised. Advertisers don’t exactly have a great track record of knowing how to speak to women.

One thought on “Not buying it”