The past week or so, it seems like my world has been inundated with ads for the upcoming 50 Shades of Grey movie. For the record, I have not read the books, nor will I be seeing the film. Not because I’m offended by the concept of kink, but rather because I’m very offended by terribly written books. Especially terribly written books that hit it big solely because there’s a big segment of the human population that thinks taking an extra cheese sample at the grocery store counts as living dangerously.

Aside from the awkward name, quinoa is a pretty sexy little powerhouse. It has tons of protein, plus fiber, calcium, iron, and a whole cocktail of B vitamins. And even though it seems grain-like in texture, quinoa isn’t a cereal, which makes it a gluten-free food. It’s actually in the same plant family as spinach, and the part of the plant you see packaged in stores is the seeds. Essentially, quinoa is the epitome of all that is awesome, the complete polar opposite of Anastasia Steele.

The only real downside to quinoa is that it’s coated with saponins, a natural defense mechanism that tastes bitter and foams like soap. In other words, saponin is the Christian Grey of the plant kingdom. This means that you need to thoroughly wash quinoa before cooking it, and you’ll need to use a very fine mesh strainer so that the sneaky little seeds don’t slip through. Once it’s washed, combine a 2:1 ratio of liquid to quinoa (I prefer chicken broth), bring it to a boil, then reduce to simmer for about 20 minutes (or until all the liquid is absorbed).

In addition to eating quinoa as a side dish like rice or couscous, there are tons of great recipes out there for more creative ways to cook it. One of my favorite recent discoveries is this recipe from Whole Foods for an egg bake that uses quinoa to create a sort of crust. You could easily adjust the recipe to accommodate whatever herbs you have on hand, and it can also be made paleo by swapping out the milk for coconut milk and skipping the cheese topping (but don’t do that, cheese is delicious). I used Silk unsweetened coconut milk in the version pictured above, and it worked like a dream without any coconut flavor.

Unlike 50 Shades of Grey, I completely understand and support quinoa’s recent rise in popularity. Not content to rest on their laurels (and some damn fine laurels, at that), the superfood superheroes at Nuts.com have started carrying pre-cooked quinoa dry goods. Quinoa puffs are a tasty gluten-free alternative to cereal. They taste like Rice Krispies (and sound like them too) but have the added benefit of protein. I love combining them with a handful of freeze-dried fruit and coconut milk. 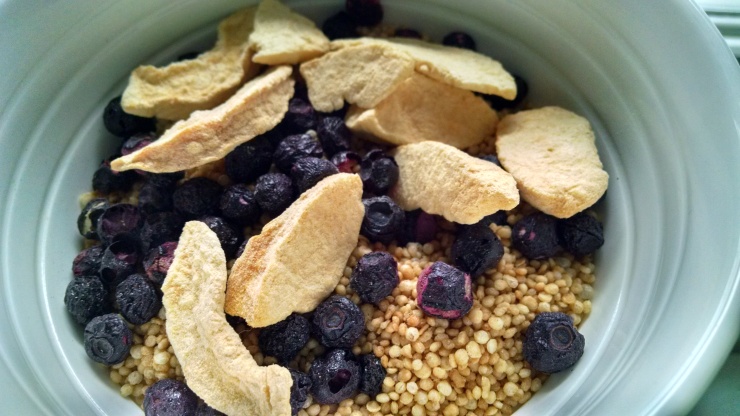 If, like the rabid 50 Shades fandom community, you’re looking for something hot and messy, they also carry quinoa flakes. These cook up with the speed of instant oatmeal and the texture of Cream of Wheat, but with the slightly nutty, legume-y taste of quinoa. The mixture may seem a little liquid at first, but it quickly thickens as it starts to cool.

Put 1 cup unsweetened almond milk in a large microwave-safe container and heat for 1 minute. Add 1/3 cup quinoa flakes, stir well, then return to the microwave for another 1 minute – 1 minute 30 seconds. Top it off with a handful of freeze-dried strawberries or 2 Tb apple butter and prepare for a mouthful of pleasure.