The year in reviews

Recently I’ve had a bit of brain spark on an idea for a novel that has been stewing in my head for a while. I’m going to try to focus my creative energy on outlining it, which probably means fewer blog posts for a few weeks. Rather than leave you in the lurch, I thought I’d pull together everything I’ve recommended you watch over the past year.

Though I’m not much for year end roundups, anyone who knows me well knows that I can’t pass up a perfectly good opportunity to compile a list.

I started out the year with a few thematic collections, the first being romantic films that are decidedly odd. This includes Frequencies, In Your Eyes, and The One I Love. As of this post date, all three are still available to stream on Netflix. They’re all worth watching for different reasons, but if you only have the time or inclination to watch one, I’d say go with The One I Love.

The second thematic collection were apocalyptic (or otherwise dystopian) movies. A personal favorite category, which some might say makes me a bit of a downer. But I see my interest in societal collapse as a curiosity in human behavior rather than a desire for actual chaos.

The list is mostly television, with a film pick and also an honorable mention that gets points for trying (but ultimately failing to entertain with) a novel premise. 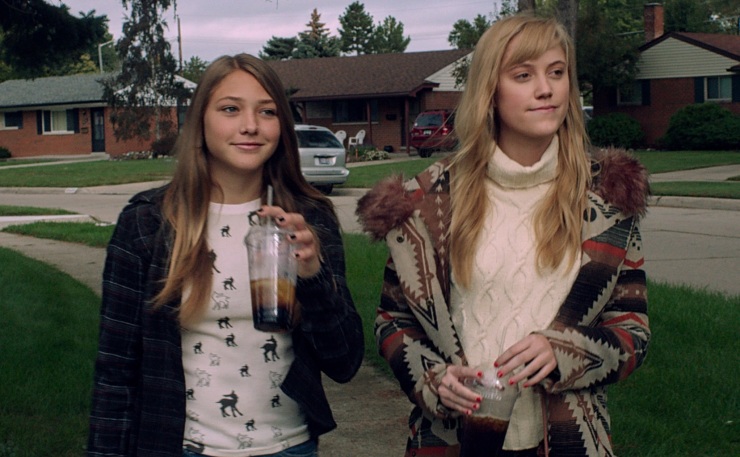 My next review was also one of my favorite films of 2015, and definitely a film I’m glad I first saw in the theater. While you no longer have the opportunity to see It Follows on the big screen, you should watch it on a screen that has a robust sound system.

The film is not really all that scary, at least not in a classic horror way. But it is the absolute best kind of creepy, and if you’re someone who finds atmosphere to be engine-revving (I definitely am), then you are in for a treat.

What struck me in particular about Advantageous is that it’s dystopian sci-fi with a decidedly female voice. It was written and directed by a woman, all the main characters are women, and its messages are particularly poignant to the female viewer.

Which is not to say that this is a film only for women – I think that men could also gain a lot of insight from watching it. More than the messages though, it’s also beautifully shot and expertly acted.

Zombeavers (pictured above) is campy as all get-out, but it’s really not trying to be anything otherwise. And Love in the Time of Monsters (pictured below) has its tongue squarely planted in cheek. Both are absolutely ridiculous, but the second is definitely my favorite of the two.

This final series of reviews is probably the most ambitious project I’ve ever tackled on this site. It’s also my favorite undertaking of the year, and the longest post I’ve ever written here.

In a moment that was either madness or genius (I am still undecided) I decided to spend a long weekend watching every Hellraiser film in order. With nine total movies in the series, that meant three each day for three consecutive days.

Also some, but not all, of the Hellraiser movies really are worth watching. Clive Barker has a unique way of crafting monsters who are not 100% monstrous, and Pinhead is a prime example.

Original post: The nine lives of Pinhead – a Hellraiser experiment

While this isn’t a movie review, I couldn’t leave this post off the list. Partially because I’m proud of the wordplay and partially because, even though I vowed not to, I actually caved and watched the movie a few nights ago.