Vegetables are not exactly a family favorite in my house. In fact, I routinely joke at how backwards it is that I’m perpetually trying to convince my parents to eat their vegetables. I’ve tried sprinkling broccoli with cheese, tossing green beans with Old Bay, and I even went so far as to call Brussels sprouts “miniature cabbages” in a desperate attempt to get my folks to give them a fair shake.

By a stroke of luck, I recently found a vegetable-related product that combines my love of single-purpose kitchen gadgets with my love for infomercial items. Seeing as it’s currently Passover and most carbs are off the table, it seemed like a perfect opportunity to foist vegetables upon my reluctant family. Ladies and gentlemen, meet the Veggetti™ Spiral Vegetable Cutter.

This nifty little slicer spiral cuts anything cylindrical into long strands that mimic noodles. The packaging is full of cheesy ultra-hyped promises (my favorite kind) such as telling you that it cuts down the calories from 800 for pasta to 60 for Veggetti™ noodles. The teeny tiny asterisk text clarifies that this comparison is for a 4-cup serving, otherwise known as the amount of pasta that would actually feed an entire family. 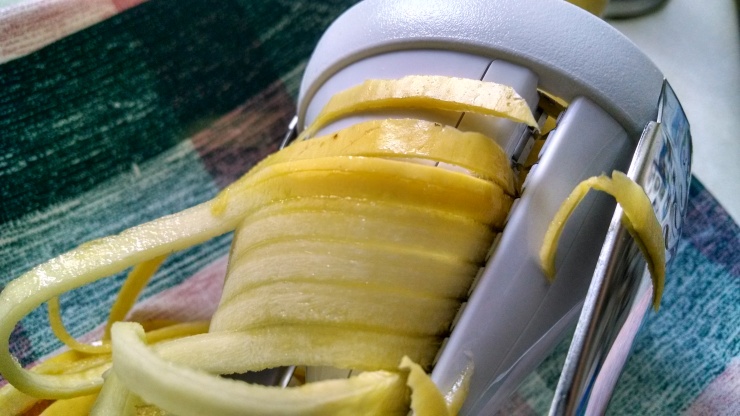 I was worried that the product would be of the same quality as the packaging, but was pleasantly surprised to find that it allowed me to very easily spiral cut a stack of zucchini in no time at all. I didn’t even need to use the weird grabber cap that’s supposed to protect your fingers, because I’m smart enough to stop twisting the zucchini before my fingers entered the peeler cone. I can see it coming in handy if you were working with something slippery, like a peeled cucumber, but otherwise it’s manageable with an average level of dexterity. 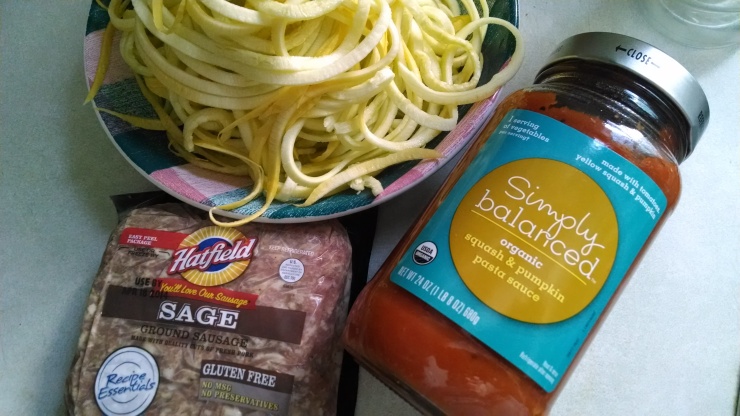 To make this process a bit easier on myself, I opted to use pasta sauce from a jar rather than make my own. I generally prefer to make sauce myself, but I wasn’t sure how tricky the slicer would be to use and this stuff is actually quite good. It’s Target’s in-house organic brand and is often on sale. Because it’s a squash-based pasta sauce, it had the added bonus of making this a foodception meal.

All I did was brown some sausage, add it to the pasta sauce, and pour it over zucchini noodles that I had parboiled for 2 minutes in chicken broth. The result was a dish that my father dubbed “surprisingly edible” as he proceeded to explain the dread he had been feeling about the impending veggie-fest. Whether you’re following a gluten free diet, going full-on paleo, or just trying to increase the amount of vegetables in your life, the Veggetti™ (despite perhaps needing a catchier name) is a great tool for chefs of any skill level. 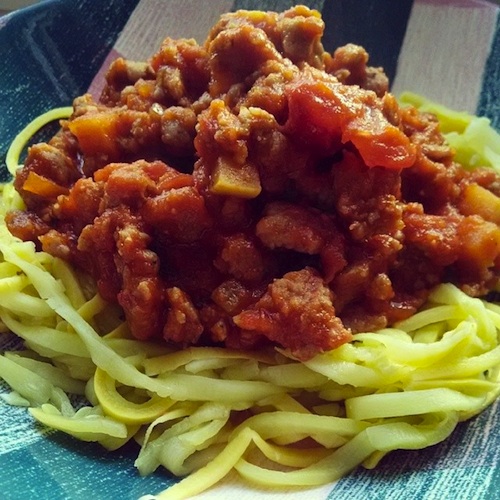 6 replies on “Faking it – Vegetable pasta”