My subconscious has been infiltrated by pancakes. Not that anyone needs any particular reason to fixate on pancakes (they’re fixation-worthy in their own right) but my own hankering has come from reading my way through the Odd Thomas series. The titular character is a fry cook who is renown for his pancake skills. And also seeing ghosts. But ghosts don’t have nearly the same pull on my subconscious as pancakes do, it would seem.

The cruelty in this craving is the simple fact that I am terrible at making pancakes. For all the cooking that I do, you would think that I’d be able to handle something supposedly so simple, yet they elude me. Grilled cheese, tuna melts, fritters, crabcakes, latkes – I rock them. But attempting to make pancakes is a guaranteed recipe for failure. If you’re a potential suitor (a creature I’m starting to suspect is mythical), the key to my eternal devotion is a well-made stack of fluffy buttermilk magic.

Since I’d managed to convince myself that zucchini was a substitute for pasta, I figured making a pancake that wasn’t really a pancake might actually work. I took a recipe that came from my almond flour dealer, halved it and added a bit more moisture. The end result didn’t exactly satiate my pancake lust, but it was tasty and I managed to only burn two (a new personal best). 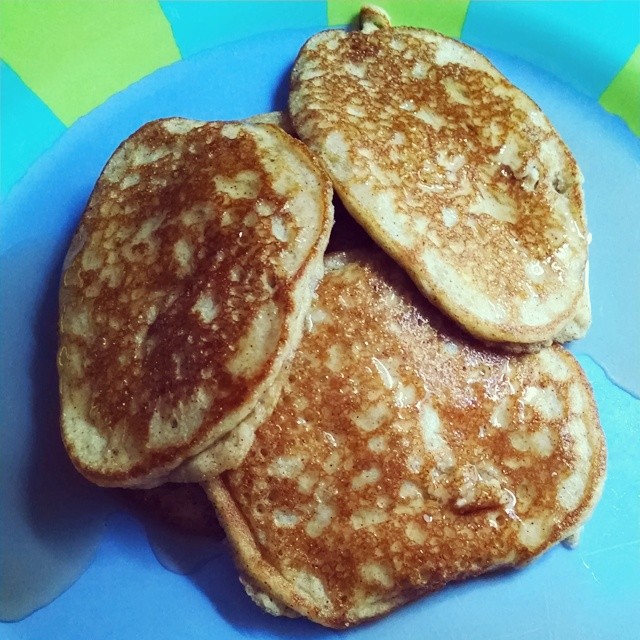 The trick to not murdering these pancakes, for me anyway, seemed to be making six smaller cakes rather than three normal ones. Don’t let the extreme close-up above mislead you; the pancakes pictured are about the size of a coaster. If you’re cooking for multiple people, the recipe should double without any problems (since it’s a halved recipe to begin with).

I just mixed all the ingredients together to make a batter, coated a pan with nonstick spray, and cooked over medium heat. If you don’t have any ripe pears around, I suspect you can achieve the same result with applesauce (2-3 Tb should do the trick). In addition to being delicious, depending on the ingredients used they can also be gluten-free and paleo-friendly. What they cannot be is buttermilk pancakes, but they’ll tide me over until I can get my hands on the genuine article.