Cashing in on fandom

It’s a commonly understood fact that Star Wars is more than just a series of films. It’s a rallying point, a fandom community of galactic proportions, and therefore, a big market for merchandise. As I was buying a Han Solo dress this morning (and wondering if it would be considered office-appropriate business casual attire), I started to wonder just how much Star Wars stuff is out there. It took very minimal searching before I realized that there isn’t just a lot of stuff, there’s a lot of very weird stuff.

Now, I’m not talking about things like a tauntaun sleeping bag or Darth Vader bacon tee, which are more quirky than weird. I’m a grown woman who spends the winter months walking around the house in a Totoro onesie, so I certainly can’t judge someone for wanting to own a Stormtrooper lounger. But there are some items available for purchase that truly puzzle me. 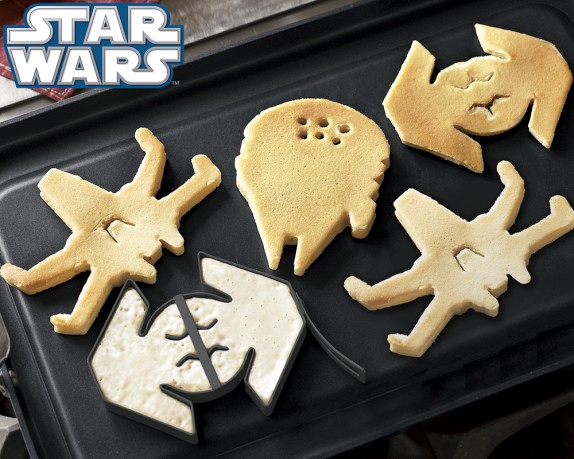 Williams-Sonoma holds a special place in my heart as a purveyor of single-use items, so it came as no surprise to me that they had a Star Wars section on their website. I can maybe understand wanting a pancake in the shape of Darth Vader’s head, but when you turn the Millennium Falcon into a pancake it just kind of looks like a janky slab of bread. You can also turn it into a cookie, which seems like more trouble than it’s worth, considering you’re just going to eat it. To be honest, though, these were still fairly normal compared to what else is out there. 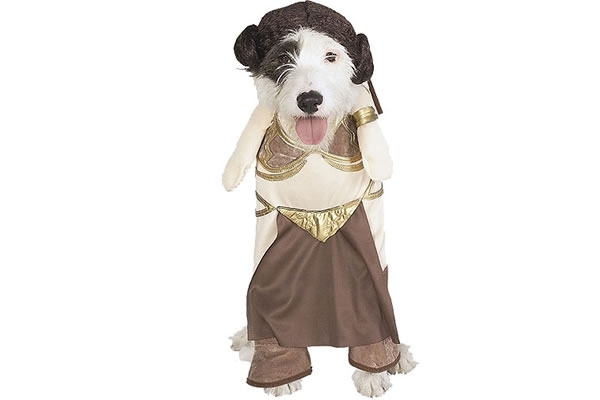 I have mixed feelings in general about dressing up dogs, but dressing up your dog like sexy enslaved Leia is a particularly nasty variety of wrong. Maybe it’s the fact that this model pooch is sticking out its tongue, but the image makes me super uncomfortable. I get the impression that if this were up for sale on Amazon, the “people who bought this also bought” section would include industrial-sized jars of peanut butter. Almost as distressing as this was another site offering a very large slave Leia car decal. That one’s a total babe magnet, I’m sure. 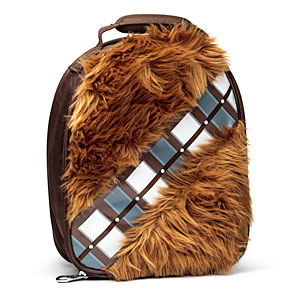 The real winner in this weird contest (if winner is the appropriate word to use) is Think Geek. For example, they claim this lunchbag “looks like Chewbacca.” It doesn’t look like Chewbacca so much as it looks like they skinned Chewie to make it, Cruella de Vil style. Also, I’m not comfortable with that amount of fur, faux or otherwise, being so close to my lunch. While you’re in kitchenwares, there’s also a Death Star tea infuser. It looks like a regular tea infuser, with a dent in it.

Not only do they have copious amounts of oddball Star Wars merchandise, but some of it is actually of their own invention. Take, for example, this Dark Side coffee, “hand roasted by Stormtroopers,” or this R2D2 USB car charger for your phone, which takes up the cup holder you’d normally use to hold your travel mug of Dark Side coffee.

However, all of the above mentioned items seem downright tame when compared to this last piece of merchandise. 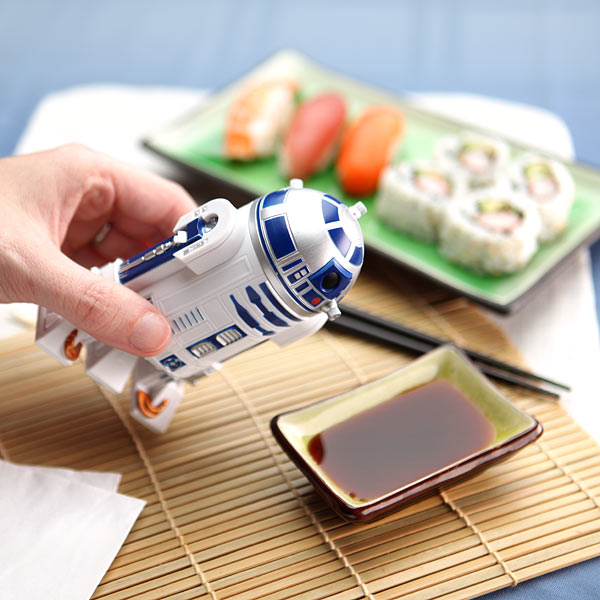 The product research team at Think Geek put their heads together and came up with the strangest single-use item I’ve ever seen: the R2D2 soy sauce dispenser. They’ve modified the original model so that the holographic projector is now a pouring spout, because George Lucas obviously didn’t spot this major flaw in his first design. In an additional upgrade, this lovable robot/umami machine is now dishwasher safe. So, next time you’re dining out, feel free to turn it into the full fanboy experience.

4 replies on “Cashing in on fandom”