A long time ago (in a blogosphere far far away) I wrote up a post about making cupcakes using diet soda, a pastime that was oh-so-chic on the internet of 2010. I honestly have no clue what made me remember that baking escapade, but I think it was probably something to do with the way this week’s gloomy weather made me want to eat cake.

Since my home is filled to the brim with La Croix (yes, I am one of those people) I thought it would be fun to attempt the same cake magic using seltzer instead of soda. If it’s the bubbles that makes the process work, why not seltzer? You get the fat/calorie benefit of not adding eggs or oil and also the no artificial sweetener benefit of not using soda. And while I’m aware that boxed cake mix is not exactly clean eating, turning it into a less-guilty pleasure while also trimming back the preservatives sounds like a win to me.

The first step of this process is to gather your ingredients.

Yep. That’s it. Two ingredients – 1 box of cake mix and 12oz of seltzer. I’d stick to cakes that have pudding in the mix, which seems to be most of them. I chose vanilla as a standard base flavor to build on. From the many flavors of La Croix I settled on Apple Berry because it sounded seasonally appropriate. 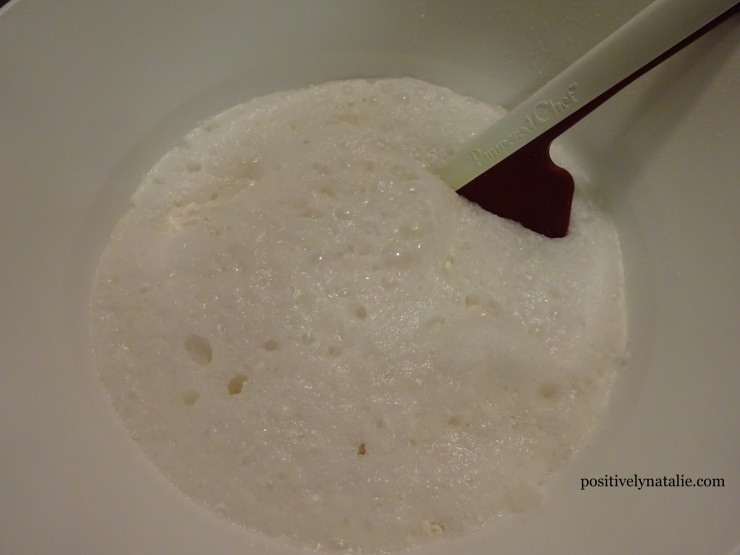 Find yourself a ridiculously large bowl, because this is going to foam up like one of those school science project volcanos. Mix it together until you have a smooth batter and pour it into your pan of choice. I was going to make cupcakes as a comparison but I got super lazy (seriously, this perpetual drizzle is exhausting) and decided to just tip it into a 13×9 pan and see what happened.

The end result? A cake that was light and fluffy, sort of an angel food cake hybrid. I thought I could detect a faint hint of berry flavor, but mostly it just tasted like cake. Which is a success!

The nutritional info will change depending on the type of cake mix you use. If I only cut this into 10 pieces (which I think seems like huge pieces) the nutritional stats per piece will look exactly like what’s written on the box.  This is because there are no additional calories/fat/etc. added to the mix. Realistically, I think the stats could be even lower, especially if you portion it into cupcakes.

I forgot that my original recipe suggested adding 5-10 minutes to the baking time, so I just baked this according to the package directions. It’s cooked through, but I think an extra 10 minutes would probably help firm up the texture a bit and help it retain structure when you cut into it. Especially if you’re planning on baking two round cakes and layering them. 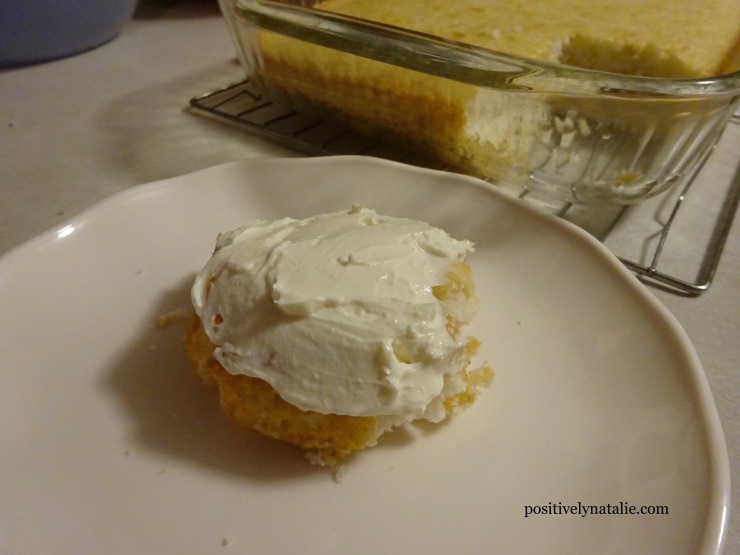 When it comes to icing, I highly recommend the Cool Whip version I outline in the original post, but not having those ingredients on hand I thought I’d extend the experiment to making myself a single serving of topping. I mixed together about 2Tb of lowfat cream cheese, 1/2tsp (ish, I wasn’t strictly measuring) of vanilla protein powder, and a little splash of milk just to thin it out a bit. Not as good as the original, but in a pinch it was still pretty tasty.

If you decide to bake up a batch of seltzer cake, I’d love to know what flavor combinations you use and how it turns out!

2 replies on “Faking it – Seltzer cake”